We left Katmandu early in the morning for a wonderful 5 hour bus ride out to Chitwan National Park (which on Nepalese time should translate to 8 hours). One of the first things to know about Nepal, is that the roads and traffic are bad, everywhere. They’re currently building highways to connect the south and north together, but these won’t be finished for a few more years. And currently these road works just add to the chaos. Being stuck on a bus hungry and thirsty for an unknown period of time (with no toilet) left us both in ‘fabulous moods’.

We eventually arrived at the bus station (which was a wooden shack in a dirt field). We were ushered off the bus and then piled into our hotel’s 4X4. We had finally arrived at Chitwan National Park! This park is the first national park in Nepal, and became a UNESCO site in 1984. This is also one of the best places in the world to see Tigers (not to mention Rhinos, wild Elephants, leopards and monkey’s). The park came to be after the number of Rhinos dropped to less than 100 in the park area (as a result of poaching). 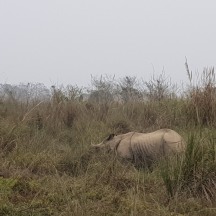 After we got settled into our room and grabbed a cool drink, we then headed out for a walk into Chitwan park. We meandered slowly down dirt tracks, walking past the domesticated elephants. Dogs were running round our ankles barking at clumps of trees. Our guide said it could be, because there’s a Rhino lying down there, or a tiger. Needless to say this was pretty exciting. We really were in the wild. After not being able to see what the dogs were barking at, we continued onto the river. Where we really did get to see three Rhino’s. One bathing in the river, another grazing on the grass, and another taking a nap. Its wonderful to be so close to such powerful and gentle creatures. They seemed extremely relaxed, whilst the hundreds of tourists continually took photo’s of them, hoping for that perfect picture. With the sun setting slowly in the background we walked back to the hotel for dinner. Food was a simple affair here, but the evening ended in an argument between the Magician and I. A tense atmosphere started to settle over us, and I became increasingly nervous and lost on how to break through to the Magician.

The morning started with a canoe ride down the river with crocodiles swimming up past us. Some so big, they were almost the same length as the 8 person canoe we were squeezed into. Apparently we were entering crocodile mating season, so the male’s were much more likely to be aggressive. Our guide would nervously pull the canoe into the river bank at different points to make sure he didn’t make headlines with having lost a tourist (or two) to these pre- historic monsters. We saw a huge number of birds up and down the river eating. They seemed completely undisturbed by the number of crocodiles around. Going about their day trying to catch fish. Here we kept seeing the Kingfishers dangling on branches, with fluorescent blue feathers highlighting their small bodies in the sunlight. 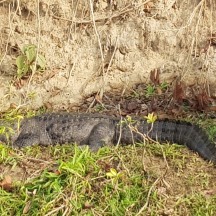 In the afternoon we were on a 4X4 tour out to the alligator sanctuary. Here they are breeding alligators to help rebuild their population in the wild. Alligators tend to eat mainly fish, and are distinctly different from crocodiles, because of their long thin snouts and narrower bodies. The 4X4 passed us quickly through the park, whilst we kept peering around trying to catch glimpses of orange and black stripes.

Our final trip out, was an elephant ride into the jungle. Now this is a very controversial topic. And rightly so. The elephants that are used for this, have been domesticated. The majority were born into this life. A small few are wild elephants that have been captured. From what I saw, all the elephants were lovingly looked after (mainly by 2 keepers for 20period  years at a time) so that the elephants feel secure with their keepers. When the elephants escape, they typically come back within a couple of days. To me this would be a show that they are happy (if not why would they come back?). Well, you could also argue they come back, as they’re fed ‘snacks’ which they love. So they would be bound to come back for these. But the main reason I think it would be hypocritical to have a problem with this, is that I ride horses. And I have never questioned the ethics of this. So if I would ride a horse, why not an elephant? Obviously, if the elephants were badly treated, I would not feel comfortable. But this wasn’t something that I saw here. The elephant ride itself was fun, but we didn’t get to see any new wildlife (beyond what we’d already seen). With the number of tourists bouncing round to ‘tick a box’ that they’d ridden an elephant, it did leave me questioning riding animals at all. 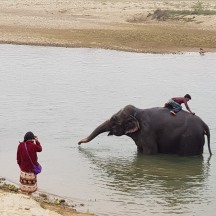 In the evening we got to watch local dancing of one of the tribes. The dances were based on what was seen in nature. For example, in one dance, a man dressed like a peacock and then gave a flower to a girl in the audience. This was great fun to watch, but during the women’s dance, they sing in a high pitched (almost wail) song, which made me want to rip my ears off.  Heading to bed exhausted from the days activities, we ended up in another argument. I started to wonder if things would get better between the Magician and I. We both loved each other, and wanted to spend the rest of our lives together. But he wasn’t willing to forgive me yet. And I was running out of ways to say  I’m sorry.