Waking at 3am I wriggled round trying to get back to sleep, but failing miserable, I then got up to start my walk into Santiago. Here I found the front door locked, with a notice saying the door wouldn’t be opened till 8-30am. I was seething. I wanted to walk, to run, to escape. I was feeling rubbish for wanting to walk alone, and just wanted to drive my emotional energy into a hard-paced walk, but I was trapped. After lying uncomfortably in the hall way, I eventually gave up being stubborn and crept back into the room. The Magician is normally a terrible sleeper, so I gently touched his shoulder to see if I could have a reassuring hug. We held onto each other for the next few hours till it was time for me to leave. He surprised me by saying he’d be leaving shortly after me too, that he too wanted to walk alone in the morning. 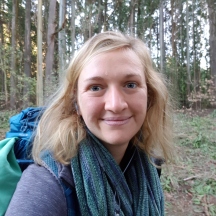 After my expected walk watching the sunrise was ruined, I’d decided to not be stubborn and ate a simple breakfast in the hotel before setting out. Walking out in the early morning mist I could see if I had been able to escape I probably would have been run over and left for dead. The Camino was right on the main road with trucks hurtling down the roads at ridiculous speeds. Eventually the walk separated out into a light forest and I started to cry. I couldn’t help it, the tears came unbidden and I let them fall. For the years previously I’d worked hard to stop crying. For a long time, the reaction seemed wrong and weak. And I’d done everything I could to manipulate them into stopping. This eventually then played out further when my husband left me. I cried over it 3, maybe 4 times at most. I’d emotionally shut myself down to the point I couldn’t understand my feelings for anything. Here I was finally undoing the consequences of that, and the tears came running slowly down my face. It was the end of my Camino, in less than a week I would have walked over 1,000 miles. I’d done it. It was almost over and I was completely alone, listening to the wind rustling through the forest. 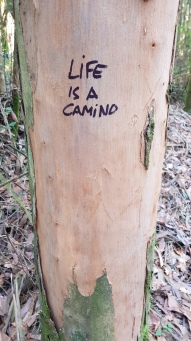 Eventually the forest thinned out and I was back to walking alongside tarmac roads in an over excited hunt for signs and views of Santiago. Lavacollla is just outside of Santiago, where in medieval times, pilgrims would wash themselves in the small stream so that they would arrive clean to the apostle’s tomb. This ritual probably came into being as a French monk (Aymeric Picaud) who wrote the medieval pilgrim guide, falsely interpreted the meaning of Lavacolla, to mean ‘wash your genitalia’, rather than ‘full of scree’. Although in fairness after a number of weeks walking I’m pretty certain the inhabitants of Santiago preferred clean pilgrims! 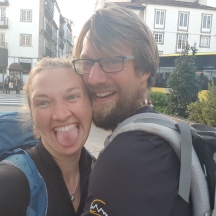 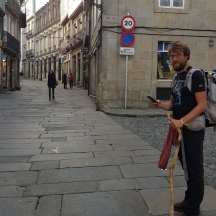 Right before I arrived into the centre of Santiago I sat down to get some lunch. The owner of the restaurant actually turned out to be an English woman who gave me the best gift I’d had in weeks. A cup of actually English tea. Of all the kindnesses shown to me over the weeks of walking, this was definitely in my top 5. She even wrapped some up for me to take with me on my final days walking. If you know any English, we’re a little obsessed about tea (and the type of tea used). Here the Magician caught up with me. After the morning in silent contemplation it felt a little like fate that we would actually end up taking the final steps in together hand in hand. I felt like an epic-ally fickle woman right then after my reaction over the last few days, but I couldn’t help but feel lighter without the other Brothers strong presence there.

The final walk in seemed constant steps of ‘are we there yet?’ Santiago itself is the 3rd largest place for Christian pilgrimage in the world. The pilgrimage is to the remains of St James (which are believed to be held in the altar). Although the year I walked was not a holy year, but when it is, a holy door (Puerta Santa) is opened in the cathedral. The next holy year is 2021, and this happens on circular pattern of 6, 5, 6 and 11 years. The downside to this though, is that the route becomes exceptionally busy! Next to the cathedral is the Parador Nancional (supposedly the oldest hotel in the world). This was created from the Hospital de los Reyes Católicos, which was a hostel founded in 1489 by King Fernando and Queen Isabella. 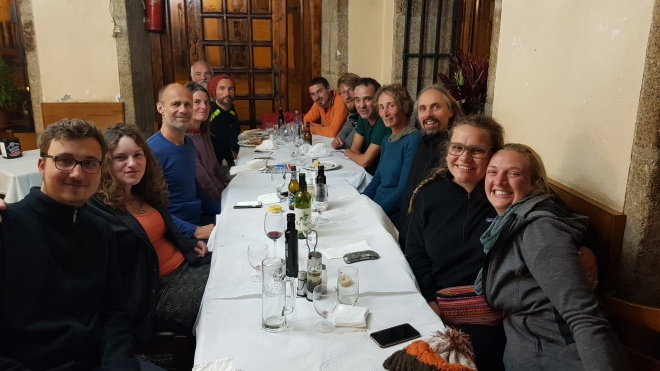 Once you reach the square next to the Cathedral, I can’t quite explain it, but you see your Camino family everywhere. You hug each other, cry with relief, cling to each other, yell with happiness, laugh hysterically or simply nod to each other. This final moment of relief at completing this cements the bonds you have together, from your shared journey of misery and beauty. This, your Camino family. The evening we managed to collect together a huge group to eat together. We caught up with friends we hadn’t seen in several weeks, and people we’d never met before. It was a wonderful night of reminiscing, laughing, stories, jokes and love. We all drank late into the night and stumbled back to the hostel.