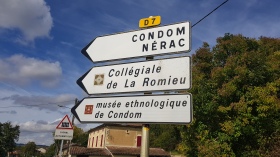 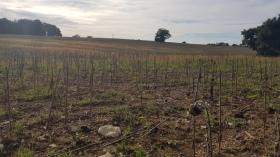 Field on the way to Marslan 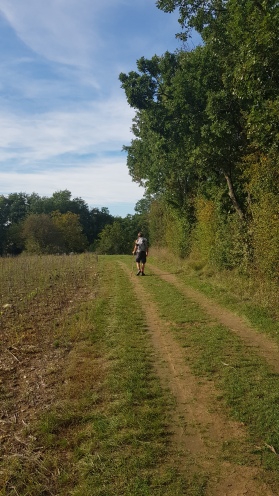 Magician in a field on the way to Marslan 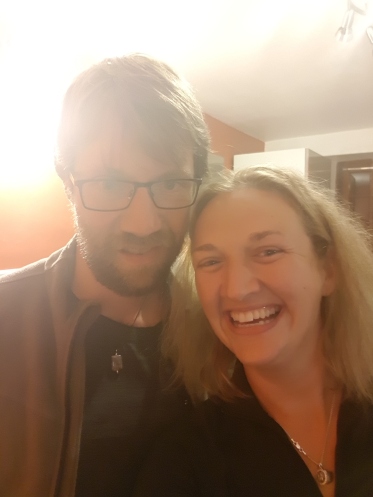 The Magician and me (with epic-ally fluffy hair)

After resting for such a long period, we both agreed that we needed to gently build up our walking again. Seeing how the Magician’s ankle coped back on the way. After picking up lunch in the local French market, we started out in the early afternoon for Marsolan (a simple 9k away).

The sun came blazing down on us as we got lost going backwards and forwards trying to find our escape route out of Lectoure. Here we came bumbling into a large group of retired French friends on a weeks’ walking holiday together. They feasted on us like a pack of starved dogs. Obviously loving each other dearly, however irritation of being stuck continually in such close quarters clear. Max flitted between the different people in the group. Whilst I practiced my French with one of the rare French people who can speak some English.

After having successfully lost the French friends, we walked through the beautiful sunshine at a slow leisurely pace. Crossing the Gers river, through flat French fields covered in grass, or with their crop of sunflowers stalked (recently harvested). Occasionally passing these large old trees, the type you’d hug as a small child. Amazed that something could be so old and still, yet dominate over you with its presence.

We walked separate for a part of the afternoon, but as a first we kept each other in sight always. I walked behind the Magician for most of the walk. Drawing comfort from the sight of him. He still had a slight limp where the tendinitis hadn’t completely healed. But it was significantly better.

Emotionally I felt exhausted from the week in Lectoure. With little else to occupy us in this time, and a natural love of intense conversation, we’d grilled each other fearlessly on the most intimate parts of our lives. My mind tried incessantly to make sense of everything that had happened there. The main thought occupying my mind, was as the Magician clearly didn’t want to have any level of commitment that I could see in the relationship, how could I reconcile my ideals of the stereotyped married life to his? Was I being old fashioned? Uncultured? Limited? Did I even still believe in all that? Or was he so free he would never commit to anything or anyone? And this was a ticking time bomb.

Arriving into Marsolan we quickly checked into the Gite, which lay at the top of a hill bathed in the golden setting sun. We quickly then wondered down for dinner at the cafe in the centre of the tiny village. As the night fell we curled up together at one of the main view points in Marsolan to stare out into the tiny mechanical lights bathed in the pale glow of the moonlight. Only to then be interrupted by the French friends, demanding to know how we met, and were we a couple. Queue groaning, and me face planting my hand.